A Day in Dublin

I have been thinking wistfully these past few weeks that it has been some time since I last visited Paris. The thing I most love to do when I go to the City of Light is simply to wander around at a leisurely pace stopping as the mood takes me to: look at pretty courtyards, admire magnificent historic buildings, visit a museum or to lunch at a favourite café. So I decided this Saturday to do a version of my Parisian wandering in my native Dublin. 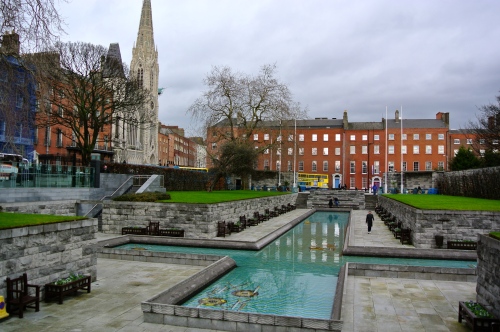 I didn’t have a plan other than I thought it would be nice to visit the Dublin City Gallery The Hugh Lane somewhere I hadn’t been for some time. On my way to the gallery I stopped to walk around the Garden of Remembrance which is dedicated to those who gave their lives in the cause of Irish freedom. The garden was one of the places Queen Elizabeth visited on her tour of Ireland last year. In a moving and wordless ceremony she laid a wreath honouring those who fought against her ancestors. It was a moment of great symbolism signifying reconciliation and acknowledging that peace now reigns in this often troubled island. The garden is an oasis of calm in Dublin’s inner city and to my great shame I have never before visited it. I used an exit from the garden that left me directly opposite the Hugh Lane gallery.

The very beautiful Georgian Charlemont House is home to the Hugh Lane gallery. It opened in 1908 and is believed to be one of the first galleries devoted to modern art. Hugh Lane (1875 – 1915) was a renowned collector and philanthropist who gifted his collection to the city of Dublin and so the Hugh Lane Gallery was born (the full story is more complicated and involves a dispute with Dublin Corporation and an unwitnnessed codicil to his will). The Lane bequest includes works by Degas, Monet and Manet. Others too made generous donations and gallery has also purchased works. The gallery’s permanent collection is both significant and interesting. I was fascinated by the section devoted to Francis Bacon. There you can see his studio which was moved to the gallery lock, stock and barrel from 7 Reece Mews, South Kensington, London with the aid of a team of archeologists. 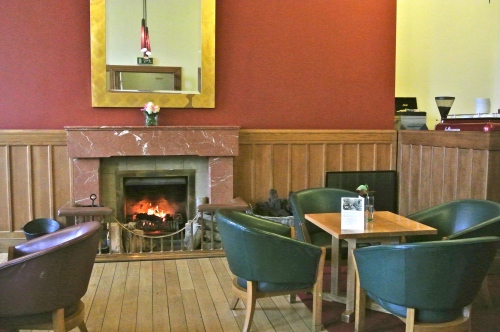 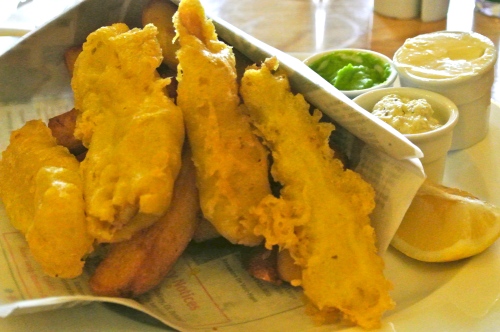 When I left the gallery I retraced my steps and re-crossed the Liffey, the river that disects Dublin, by the Halpenny Bridge. I was then in the Temple Bar area of the city and it was time for lunch. I was wondering where I might eat when I passed the Clarence Hotel (co owned by U2 front man Bono and his fellow band member The Edge) and in I went. I didn’t go to the main restaurant but opted instead to eat in The Study, which is an elegant high-ceilinged room. I had a perfectly acceptable plate of fish and chips for a very reasonable €9.95 washed down, of course, with a glass of vin rouge. 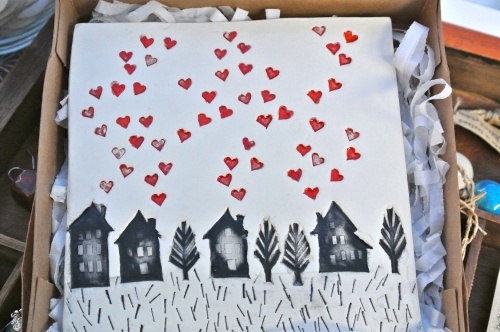 After lunch I wandered around the Temple Bar Designer Mart in Cow’s Lane (Saturdays only 10am to 5pm). I didn’t buy anything but I was taken by the hand made ceramic tile decorated with hearts that you see in the photo above (www.karoart.eu). It costs €34 and there’s a hook on the back for hanging it up. I think it would make a rather cute Valentine’s Day present, perhaps better than vastly over-priced and soon-to-wilt roses.

I enjoyed my day trip to Dublin and I am left wondering why I don’t spend more time doing stuff like this.