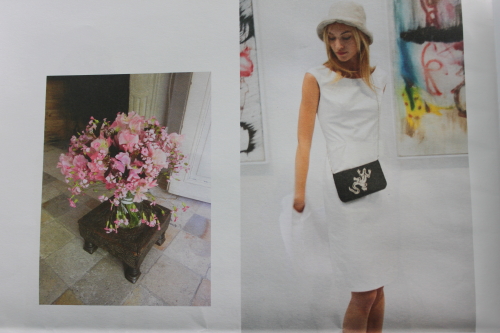 I cannot recall seeing an ad for Agnès B or an editorial features which used her clothes in any of the fashion glossies.  I imagine these two things are not unrelated, as editorial coverage can depend  on the amount a brand  spends on advertising in a given magazine.  Despite this Agnès B is hugely successful, with a loyal band followers, moi included.

The founder Agnès B was born Agnes Troublé in Versailles in 1941.  The B comes from her first husband’s surname.  She opened her first store in a converted butcher’s shop on the Rue du Jour in Paris in the seventies. According to the company’s website there are now 246 stores worldwide.

I look on Agnès B shops as semi-magical places where there are lots of clothes that I would love  to buy and wear and wear.  The clothes are: chic, stylish, understated and timeless.  There are  edgier items for the younger  set.  It is not unusual to see mother and daughter combos shopping  in Agnès B.

The staff are good. They are enthusiastic about the brand, knowledgeable about its origins and are happy to show you a different way to wear something.

The label’s dedication to quality is obvious.  The company prides itself on the fact that much of the collection is still made in France, preserving jobs and skills.  On a high street where the ethics of some of the retail giants are open to question, Agnès B stands out as a brand that is deeply committed to corporate social responsibility.

Top tip; If you are in an Agnès B shop don’t, as I  did, pick up the cutely packed small items in glasses vases, on the counters beside the tills and wonder aloud what they are – they are condoms and Agnès B gives them away for  free!

Note:  There is a no photographs policy in Agnès B shops so I shot the above images from a S/S 2011 brochure.

6 responses to “♥ Favourite shops//Agnès B”