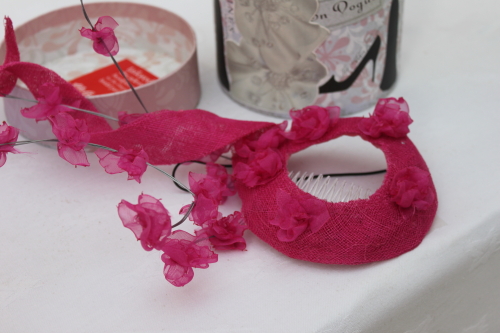 Sarah McGahon a graduate of NCAD (that’s the National Collage of Art and Design in Ireland) set up her millinery business McGahon Millinery in 2009.  Her route from school days to her present day role as designer of hats /businesswoman was a circuitous and interesting one.

When Sarah talks about her childhood it is easy to appreciate that creativity is etched into her genes. One of her grandmothers taught her lace making, crochet, flower arranging, and how to sing.  Her other grandmother introduced her to fashion, this grandmother’s sister (Sarah’s great-aunt) emigrated to America at eighteen years of age and worked first in the workrooms of Bergdorf Goodman and later as an ecclesiastical robe maker for the Archbishop of New York.  Her great-aunt was able to look at a garment, deconstruct it in her mind and then make her own version of it, so she had an array of beautifully crafted garments in her wardrobe– some of which she posted back to her sister in Ireland.  Sarah remembers from her childhood the beautiful clothes her grandmother wore (her great-aunt made dresses modelled on the creations of designers such as Balenciaga, Dior, Elsa Schiaparelli and Oleg Cassini).   Sarah is lucky to have a couple of these beautifully made clothes handed down to her from her grandmother.

When Sarah finished school she did a secretarial course and then worked for nine years as a PA in industry.  She was always looking for ways to fulfil her creative urge and attended many evening classes in different disciplines; in her time she has made jewellery, handbags, mosaics, cosmetics, and candles.  Her light bulb moment came when she a did a 20 week evening class in millinery at the Grafton Academy, she knew she had found what she wanted to do, she was really excited by the class and says going to it made her heart beat faster.  When she had finished the millinery evening classes she went to work with Irish milliner Jacinta Fahy (getting the work there took dogged determination).  She learned a huge amount from Jacinta and Sarah describes it as her favourite year so far.  When Jacinta was retiring she offered Sarah the opportunity to buy the business but Sarah felt she wasn’t ready to take it on and applied instead to do a degree in the NCAD.  After graduating she did an internship with Stephen Jones in London and a postgraduate course in millinery at the Kensington and Chelsea College. 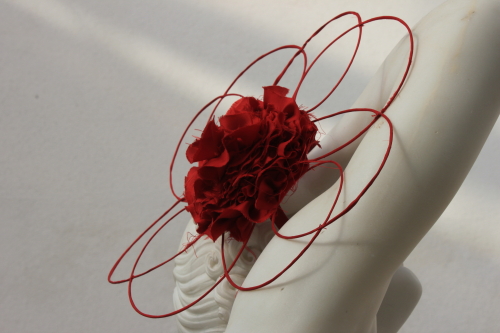 When she returned to Ireland she worked at a number of jobs before deciding to open her own business in late 2009.  Since then she has made hats for The Tudors (television series) and Dublin’s Abbey Theatre.  Irish actress Amy Huberman wore one of her hats to the Royal Wedding in April and Sarah has just returned from London where she delivered a hat to Lady Gaga’s people. 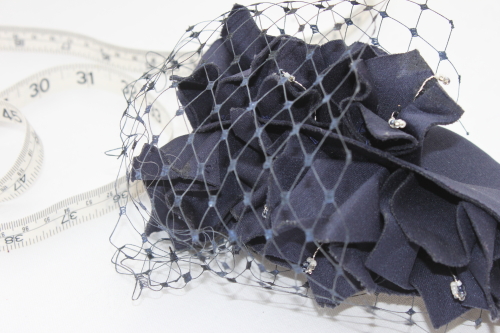 I know Sarah, so I know how determined an entrepreneur she is, how insanely hard she works and how passionate she is about the hats she creates.  I hope that she achieves the fashion flash-bulbed success she so deserves.

Note:  Sarah has a studio at the Old Handbag Factory, Church Terrace, Bray, Co Wicklow, Ireland.  The address for her website is http://www.sarahmcgahon.com  and her e-mail address is studio@sarahmcgahon.com