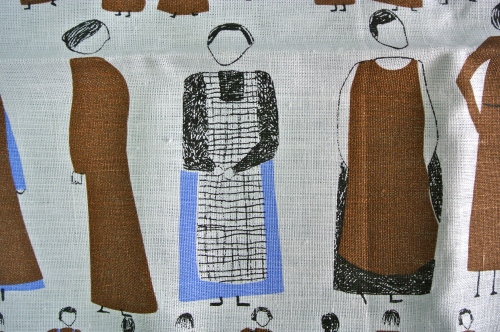 I have a tea towel obsession. Yes, you read that correctly I did say a tea towel obsession. However, obsession may be a tad strong – let’s just say I have a thing about tea towels. I am not fascinated with the use of these small rectangular pieces of cloth, as I abhor drying dishes and I would sooner do without most of the other labour-saving devices in my kitchen ahead of that splendid washer and dryer-upper that is the modern-day dishwashing machine.

The appeal is rather with the way these humdrum utilitarian items, if they are beautifully designed, can enliven a kitchen. Such is the allure of certain tea towels that I have in the past returned home from Paris with a new set of tea towel instead of some fashion fripperies. The most recent addition to my tea towel collection is a reissue, by Twenty Twenty One, of one designed way back in 1954 by Lucienne Day. I bought it when I visited the Markers & Brothers pop-up shop recently. I love incidentally the way the brothers packaged my purchase in a simple but chic manner with brown paper and twine.

I confess that before buying this tea towel I knew very little about Lucienne Day other than that she was one half of the design duo Robin and Lucienne Day. She was only one half in the sense that they were husband and wife as they were not design collaborators; they worked separately – she was a textile designer and he was a furniture designer.

Lucienne, who was born in Surrey in 1917 and died in 2010, was the child of an English mother and a Belgian father. She studied at Croydon School of Art and afterwards at the Royal College of Art where she met her future husband Robin. She first came to public attention when what was to come her most famous design ‘Calyx’ hung in a diningroom designed by Robin Day in the Homes and Garden Pavillion at the 1951 Festival of Britain. She went to become the foremost British textile designer of her generation. She was a prolific designer whose inspiration came from nature and European abstract art. There are many images of her work on the Victoria and Albert Museum website click here if you would like to view them.

I love my new tea towel which glories in the name ‘Too Many Cooks’. There is only one thing that’s a touch tiresome – it looks too good to use. So it now seems that my it’s-for-best-only syndrome extends to tea towels. Help!