I am going to stick my head above the parapet and declare that Lismore is quite simply the loveliest town in Ireland. Of course, I should say that I haven’t seen absolutely every town in Ireland and of course I should let you know that when I saw Lismore, for the first time, a few weeks ago it was on what was probably the nicest day, meteorologically-wise we have had in a slew of summers. Still I feel that Lismore would be equally alluring even on the dullest of dull days. 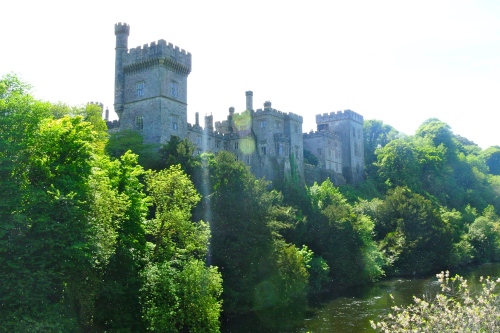 I was in Lismore, which is a heritage town in County Waterford in the south-east of Ireland, for a very short visit: not quite for a full day given that the return trip is a six-hour drive. I found it enchanting from the moment I drove over the bridge which marks the entrance to the town. It helps that to the left and right of said bridge there are views over the beautiful Blackwater Valley and that you can see, from the bridge, the properly gothic Lismore Castle perched atop a hill.

When I arrived, as is my wont, I went in search of caffeine and found the Summer House café. I wasn’t hopeful as coffee in small towns in Ireland can be a hit and miss affair but I was served a perfectly acceptable latte and an exceedingly good slice of iced lemon cake. Thus fortified I set off on a stroll around the town. 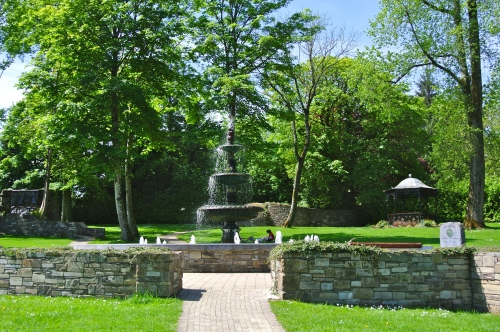 Lismore is beautiful, it has; the aforementioned fairy-tale castle; two cathedrals; a pretty park; and a myriad of interesting stone buildings. It is the sort of place where you are, (or at least I was) acutely aware of the present having deep roots and a nexus of connections in and with the past. The town’s pièce de résistance is the otherworldly Lismore Castle which if what I read on the internet is correct was used as Northanger Abbey in Andrew Davies’s adaptation of Jane Austen’s novel. The castle which has been the Irish home of the Dukes of Devonshire since 1753 was once leased by Sir Walter Raleigh. It is not open to the public but the gardens and a contemporary art gallery are. If it’s your heart’s desire to see the castle’s interior you will need as we say in the vernacular in Ireland to have ‘a few bob’; it is available to rent at a bank-balance-busting cost of €5,000 per night for groups of twelve. You may be pleased to hear that the price includes breakfast and dinner!

What with driving there and back on the same day, tracking down a coffee and a slice of cake, eating lunch at O’Brien’s Chop House (more about that lunch soon) and roving around the town the day was soon over. I didn’t see half of what Lismore has to offer so I will definitely go back and if you are anywhere near the town I would highly recommend making a detour to see it.