I was in Cambridge briefly earlier this week. Very briefly. It is so long since I was last there that time had misted my memories of the city. So it was nice, this visit, to be reminded of the beauty and elegance of the place. The night before I travelled when I was safely ensconced indoors listening to heavy rain hopping off my windows I half expected, so heavy was the downpour, to see a later day Noah scooting down the street gathering up a cacophonous collection of animals. Thankfully I checked the online weather forecast as otherwise I would have arrived in a sun drenched Cambridge, which was overhung by a cheering bright blue sky, muffled in a rain mac and toting a large umbrella.

My first port of call when I arrived was always likely to be a café in search of my daily caffeine fix. I hadn’t done any research so I wasn’t sure where to go; I passed a place called Bill’s and as it looked inviting I wandered in. It’s a cavernous high-ceilinged space with a lot of exposed pipes and ducts which gives it a Beaubourg-esque feel. As a counterpoint to this rawness there are: large and small tables, surrounded by wooden chairs, dotted about the room; masses of shelves lining the walls packed with colourfully-packaged food products; and a library area with some rather lovely battered leather armchairs. I am not sure that the coffee could be described as Cambridge’s finest but the scones I ordered to go with it were good.

As I walked around the Cambridge one of the things that struck me forcefully was the large number of bikes of all shapes and sizes either buzzing by or parked against railings. It very much appears that in the land of the traffic jam the two-wheeled bike is king. Only in Copenhagen do I recall ever seeing as many bikes.

I wandered in and out of various colleges to admire their majestic buildings and beautiful gardens. I didn’t have a lot of time to spare so I opted to just visit one place properly and bought an admission ticket for the iconic King’s College Chapel which also includes entrance to the King’s College grounds. 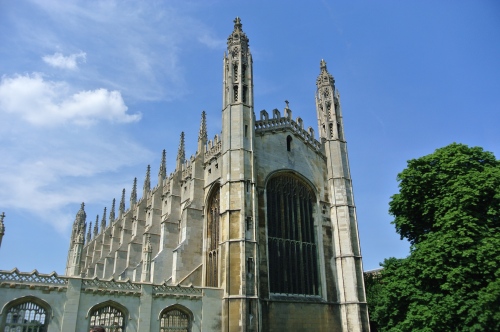 After my visit to the chapel I enjoyed exploring King’s College grounds and especially leaning over the bridge that crosses the river Cam and watching the punts go by.

There is so much to see in Cambridge and I had such little time. I will have to go back…