In and Around Florence

In May I went on holiday to Italy where I stayed in a town, Montecatini Terme, that has a regular and reliable train service to Florence and best of all the journey time is less than an hour. Florence is a compact easy-to-walk-around city: here’s some of what I did on the days I headed off from base to explore it.

Visited The Uffizi: There is a perennial length-of-a-motorway queue outside Florence’s Uffizi gallery. You can book a ticket in advance online and I did but I still ended up queuing for an hour in total: first to collect my ticket and them to get through airport like security. Next time I would have the ticket posted to my home address so I would only have to join one queue.

The interior of the Uffizi Gallery is mind boggling beautiful and it’s impossible to take in, on a short visit, even a fraction of the amazing art hanging on display. It’s overwhelming. I wandered from room without knowing the story behind all I was looking at. I did however make a point of finding Botticelli’s ‘The Birth Of Venus’ and the Da Vinci paintings the Uffizi own. Incredibly photography is allowed so long as flash isn’t used.

Shopped at The Mall: The Mall is an outlet outside Florence that’s set against a backdrop of the verdant Tuscan hills. There are luxury coaches that sally back and forth between Florence’s bus station and the outlet every half hour during opening times. The outlet is awash with a dazzling arrary of designer shops. Think: Prada, Marni, Dolce & Gabbana, Gucci … Did I buy anything? Well, er, yes: a Balenciaga scarf that had been reduced multiple times making it a steal. And a not so well reduced, but still a bargain, Moncler rain jacket. As rain jackets go it’s stylish and given the Irish weather I expect to wear it often.

Went walkabout: Florence is a veritable open air museum. It’s also, during the tourist season, a hyper busy place. The Ponte Vecchio and the Piazza della Signorina were alive with a stew of tourists, like myself, trying to cross them while drinking in their magnificence. But a few streets away calm reigned and it was much easier to walk around. As I wandered about I came across Florence’s premier shopping street, the Via de Tornabuoni – the window displays were as you might expect stylish. I bought nada because I already shopped at the aforementioned outlet. 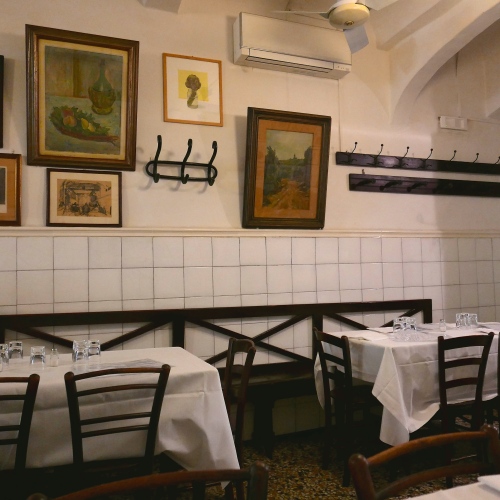 Lunched at the Trattoria Sostanza: Before I left for Italy I did some research online and decided that one of the places where I would like to lunch was the Trattoria Sostanza – it was billed as a place where locals like to eat. The exterior is distinctly unimpressive but once inside I imagined that if Carlsberg ‘did Trattoria’ the interior of the Trattoria Sostanza is what they would come up with. The dark room is long and narrow with white half-tiled walls adorned with pictures, photos, and prints; there are tables covered in crisp white linen surrounded by chic dark wooden chairs and benches; and the whole is underscored with a terrazzo floor and overhung with white globe lights. It’s a cool spot. I ordered a Florentine steak, a side of white beans in olive oil, and a glass of the local Chianti. And I followed that with wild strawberries tossed in lemon juice and sugar. The food was good without being hyper memorable.

17 responses to “In and Around Florence”