The Fish Shop is a new kind of fish and chip shop in the South Dublin suburb of Blackrock. Although it has customers who come from near and far I suspect that many who regularly walk down Blackrock’s Main Street don’t know of its existence as it is located a little off the main drag to the rear of The Blackrock Market.

The Fish Shop is the brainchild of Peter Dalton and Jay Akintola. They have taken a concept, the traditional fish and chip shop, that’s well stitched into the fabric of Irish society and served it up in a different and enticing way.

Jay and Peter’s professional backgrounds are far removed from food as they were in a previous existence both secondary school teachers. However they were and are passionate about food and they had a wish to run their own business. The idea took root when they were living in London and it was there that they cut their foodie teeth by working in the city’s vibrant street food scene. 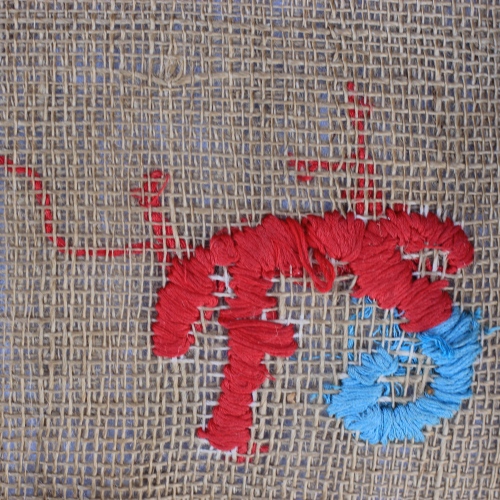 They moved to Dublin and having spent a few months getting the project up and running they opened the Fish Shop in October 2013. If you have seen the Fish Shop you will know how creative Jay and Peter are. They took what was originally a boring concrete shed and transformed it by cladding it in wood from pallets which they then painted soft shades of blue and grey. This was their shop, a half-way house between street food and a proper bricks and mortar premises. They added a decked area to the front which has bench seating covered with cushions embroidered by Jay and there is another customer seating area with picnic tables opposite the shop.

They sell fish and chips. Obviously. The chips are hand-cut and non greasy. The fish is coated in a light beer batter (there is a gluten-free option). Deliciously garlicky mussels are usually available and at the weekend they serve up a must-be-tried fish burger. They sell soft drinks and in the summer ice-cream. The Fish Shop doesn’t have a licence to sell alcohol but if they are eating on site customers can bring along their own wine or beer. 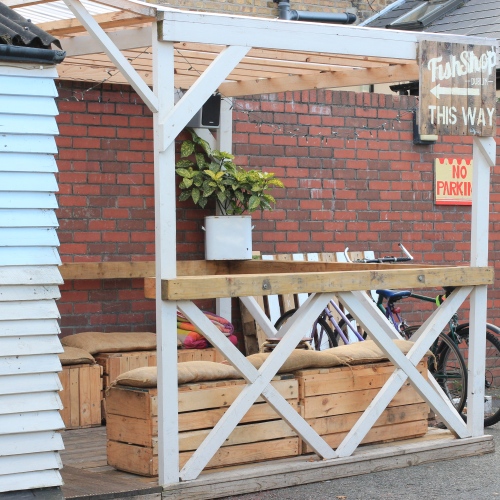 I can attest that the fish and chips are truly good as I have eaten a great deal of them lately. That’s because as part of my studies I am doing my first photographic project on the Fish Shop. So I have been there multiple times to take picture and when I was I always caved into temptation and sampled something from the blackboard menu.

The Fish Shop is expanding as Peter and Jay plan to open a second branch in the centre of Dublin in early 2015. This will be a proper bricks and mortar premises. I wish them so well with their new venture.

Peter and Jay are exceedingly nice people. I am hugely grateful to them for being so accommodating and patient when I turn up again and again to take yet more pictures for my project.

The Fish Shop is on winter opening from this week, that’s Thursday to Sunday. Exact hours and further details are on the shop’s Facebook page.