I am not fanatical about my diet but in the main I try to eat in a healthy fashion so I aim to fill my shopping basket mostly with wholesome foods. There are certain items that I buy on repeat but I am willing to experiment.

A couple of weeks ago when I was food shopping, in The Delgany Grocer, I spotted a display of a food range that I hadn’t heard of before called Dr Coy’s Health Foods. I was attracted to the display by the simple and aesthetically agreeable packaging and when I had a closer look I was pleased to see much of the range is organic. One of the products was organic coconut flour (no gluten and high in fibre) and as I had never used it before I bought a pack.

I assumed an agent was importing the Dr Coy’s range but when I got my flour home and examined the pack I found that Dr Coy’s Health Foods is an Irish company and what is more they have a base a stone’s throw away from where I used to live until I moved last year.

I discovered via their Facebook page that Dr Coy’s Health Foods were holding a tasting, the weekend before last, at Select Stores in Dalkey which is a short drive from where I live now. So, off I went and there I bought vegetable bouillon (just sea salt with organic veggies, herbs and spices) and stevia erylite (a natural sweetener which doesn’t contain maltodextrin, has zero calories, and can be used as a sugar replacement at a 1:1 ratio) to add to my Dr Coy’s collection. At the tasting I talked to Alison Stroh from Dr Coy’s and she kindly agreed to meet up with me to tell me a little about her company. 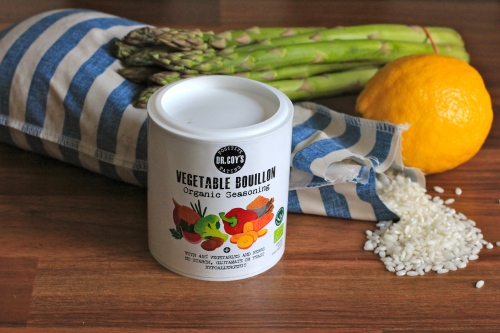 Alison, a graduate of Trinity College Dublin whose area of expertise is international marketing, worked and lived abroad, mainly in Germany but also in New York, for a several years. She returned to Ireland three years ago with her German husband and two small children. She is passionate about eating in a nourishing and wholesome way and is keen to make sure that her children’s diets are as healthy as possible and in particular that they are not eating sugar-laced foods. Back in her native land she found it difficult to source some of the products she used to buy in Germany and thus the idea of a business centered on importing, rebranding, selling and soon to be manufacturing Dr Coy’s foods (more about Dr Coy shortly) products took root. 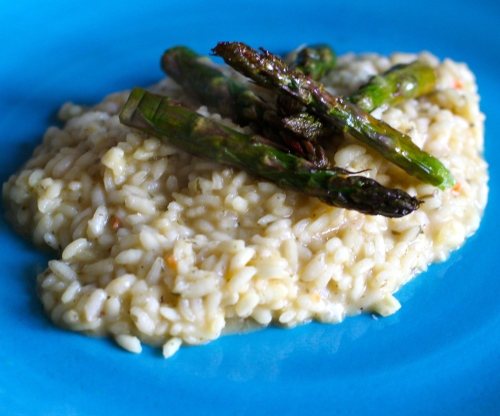 Lemon risotto, made with Dr Coy’s veggie bullion, and topped with roasted asparagus

She set up Dr Coy’s Health Foods last year with her brother Aaron O’Donohue a graduate of University College Dublin with a keen interest in cycling, endurance sports and nutrition. He was an accidental recruit to the business as at the time of the company’s inception he was recovering from a major injury. When Alison visited him she often asked for his help with something or other and slowly he became part of the fabric of the fledgling company that he now runs with her.

Dr Coy is a real person, one Dr Johannes Coy, who worked for thirteen years at the German Cancer Institute in Heidelberg and has written a book called: ‘The Anti-Cancer Diet’. I haven’t read the book and I won’t pretend, given that I don’t have even half a scientific brain cell in my head, to understand what I have read on the web about the pros and cons of his work.

But what I do believe is that Dr Coy’s Health Foods, with their focus on low glycemic (GI), non-blood sugar spiking preventative sugars, are a welcome addition to the Irish market especially given the World Health Organization recently advised that we halve our sugar intake from their previous recommendation of ten per cent of calorific intake to five per cent. So, it seems I can have my cake and eat it. And chocolate too as Dr Coy’s Health Foods is adding a guilt-free low GI chocolate to the range in June