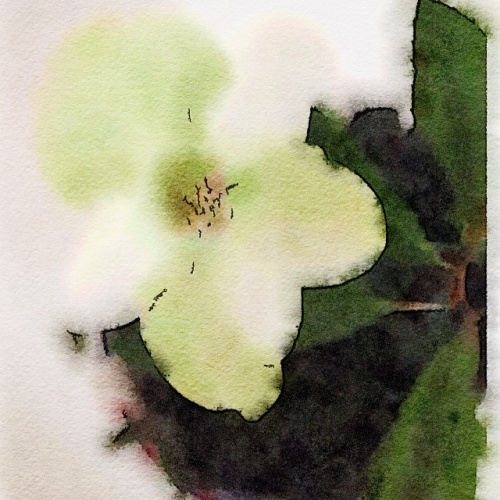 Lately I downloaded yet another photographic app to my iPhone: this is bonkers behaviour as I have an insane number of them on my phone already – many, correction most, of which I never use. However, when I read about Waterlogue on Garance Dore’s blog and admired the effect she achieved with it I was wholly smitten and bought it immediately. Waterlogue converts photographs into luminous watercolour paintings: I used it to transform a nondescript iPhone photo of a flower into the image you see at the top of this post.

Lately I came across the acronym yolo. It has apparently been around for a while but, as per, I am late to the party so I had no idea what it meant: I googled it and found that yolo = you only live once. Gosh, I reflected that’s just another way of saying carpe diem but as I scrolled through the google pages I discovered that about eight three million and seven people had thought of that already. Clearly I haven’t an original idea in my head. I am allergic to the acronym lol but I am unfathomably fond of yolo, I suspect because it’s a memorable way of expressing a simple yet profound idea.

Lately I have been drinking turmeric tea. I cannot remember when or indeed where I first read about cinnamon and turmeric being good for our health but when I did I started to incorporate cinnamon into my diet. This was easy as I could sprinkle it on my porridge, add it to the mix when I was making scones or crumbles, dust my coffee with it … Turmeric wasn’t so easy to incorporate until I happened upon some recipes for turmeric tea. I make mine by: putting one mug of water and a half a teaspoon of turmeric into a saucepan and bringing to the boil, then I reduce the heat and simmer it for about ten minutes, lastly I strain the liquid into a mug and add honey and soya milk to taste. I think it’s delicious.