So. I put learning a little about the history of art, by reading some books on the subject, on my list of things I would like to do over the next decade. So. I have over nine thousand images that I’ve taken over the past few years stored on my MacBook, and I am beginning to worry that if I don’t delete some of them soon my Macbook’s memory may implode like a dangerous building being demolished with dynamite.

There is a tenuous connection between the two items in the last paragraph, in that among the thousands of stored images are some I took at the Musée Rodin in Paris when I was there last November. Well I though, given that what I knew about Rodin could be writ large on a grain of rice, why not do some light reading and learn a little about him before I deleted most of the images.

The Musée Rodin, which opened in 1919 is in the Hôtel Brion (a building where Rodin once had a studio), in Paris’s chic seventh arrondissement, hard by the beautiful Les Invalides with its gold topped dome and a short stroll from the Eifel Tower: both buildings are visible from the museum’s garden. And it is the three hectare garden that contributes so much to making the Musée Rodin such an enchanting place: the garden is beautiful in itself but made more so by the many Rodin sculptures placed there, including two of his most famous pieces: ‘The Thinker’ and the monumental six meter high doors ‘The Gates of Hell’. Inside the Hôtel Brion are galleries filled with: sculptures, paintings, drawings, prints, ceramics, and photographs. 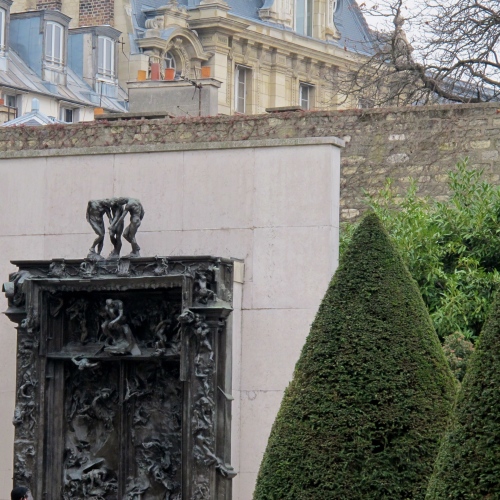 Auguste Rodin was born in Paris 1840 and died in Meudon in 1917: he met his lifelong companion Rose Beuret in 1864 yet only married her weeks before his death. Aged fourteen he went to the École Impériale Spéciale de Dessin et de Mathématiques (‘Petite École’) – where he honed his drawing skills. When he left he failed to gain a place, flunking the entrance exam three times, at the prestigious Ecole des Beaux Arts, so he learned his art during a long and arduous apprentice-ship.

When he struck out on his own Rodin was often on the receiving end of criticism as he sought to move his sculptures away from classicism, which was the prevailing influence of the day, towards a new realism, but he was not without support and received commissions from the French government. Aside from Rose the woman most closely associated with Rodin was his pupil and mistress Camille Claudel (1864 – 1943) and although she destroyed much of her own work during her lifetime the Musée Rodin also displays pieces by her. Before Rodin died he donated his body of work and works by fellow artists that he had collected to the French state provided they opened a museum to house the collection in the Hôtel Brion.

I am sure many of you know most of this already but I didn’t, so it’s good to have a few salient facts about one artist: a tiny pin-prick of knowledge to pierce my deep as the ocean ignorance.