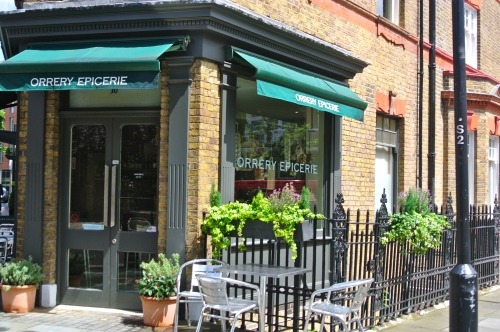 I have no idea how many establishments there actually are in London where it is possible to buy a coffee. However I suspect if they were all slammed together into one linear-mile-long street that to fit them all in the buildings on the imaginary street would, like a miniature version of Manhattan, be sky-high. When I was in London recently, despite the plethora of choice for a caffeine fix, I ended up returning to the Orrery Epiciere on Marylebone High Street, partly because I was in the area but mainly because the last time I was there the coffee was a model of perfect velvet-y smoothness.

The Orrery Epiciere which according to the Orrery website is open for breakfast, lunch and early supper is lilliputian but much is packed in. There are: a handful of tables surrounded by chairs; a counter to sit at running along the front window; shelves filled with foods and wines; and a deli counter with yummy looking food in the fridges and a tempting selection of salamis dangling over it. Outside there are some more tables which this year must definitely be reserved for die-hard optimists as the leitmotif of the summer thus far has been rain – rivers of it. 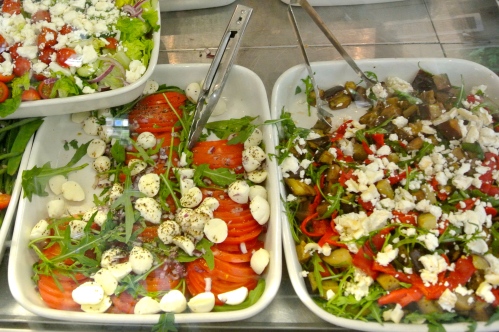 I just had a coffee with a macaroon. If you are heading there for lunch the menu offers a soup of the day, various salads and plates (salmon plate, charcuterie plate, cheese plate etc) and a pretty good selection of wines by the glass. As I was there before noon I had no difficulty getting one of the table but I suspect that’s not so easy come the lunchtime rush. As it’s principally a delicatessen all the gourmet food is also available to-go.