Out and About Last Weekend

Last Saturday blithely ignoring that it was the sort of grim rain-sodden day that makes venturing outdoors foolhardy, I decided to go to the farmers’ market (Saturdays 10am to 4pm) at Kilruddery House, a historic house in County Wicklow that has been home to the Earls of Meath since the early 17th century. 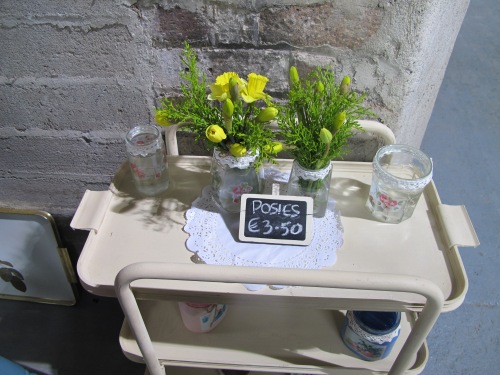 I was well muffled up against the elements in a woolly hat and a large jacket but any bit of me not covered by said jacket was totally drenched by time I had made the short walk from the car park to the farm outbuildings where the market was held.

Thankfully most of the stalls were indoors, there was quite an amount of food on display, some of it savoury but there was also all manner of cake-shaped temptation. And for once I managed to resist the siren call of sugar. But I did buy a few things: a tin of sardines in olive oil; some manchego cheese; and a tiny pot of port jelly.

It was a real shame that the weather was so miserable as I would like to have explored the Kiruddery House gardens; methinks a return trip on a nicer day is now on my agenda.

On Sunday I headed to the city centre to see the Makers and Brothers pop-up shop in Brown Thomas (a Dublin department store). I love what Makers & Brothers are doing and what they sell; I have written about them before see here. The brothers are Jonathan and Mark Legge and the makers are the craft and design people who create the products the brothers sell.

Jonathan who is the creative director of the company often collaborates with the makers perhaps suggesting  a small tweak to an item before it’s added to the stock they sell. Jonathan has a serious design pedigree and has worked, in London, with Isle Crawford a luminary of the design world. 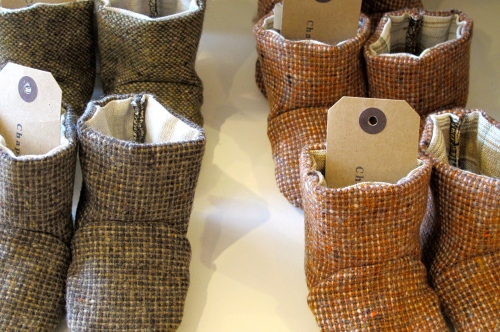 As part of the Irish Presidency of the EU (January – June 2013) the Craft Council of Ireland is showcasing the best of Irish craft in the foyer and the presidential suite of the Justus Lipsius building in Brussels; Jonathan Legge curated both these installations.

Makers and Brothers stock is an assemblage of delicious pieces from a set of mainly Irish makers. The pop-up shop is on the Living Floor (third level) of Brown Thomas until Monday the 6th of May. It’s so worth a visit.

When I had finished admiring the pop-up shop I headed for brunch. As I feel that I am stuck in a bit of a food rut  often returning to familiar and favourite cafes  I decided to try somewhere I hadn’t been to before: Coppinger Row. I ordered a plate of  garlic and chilli prawns. The dish may not have been total ambrosial perfection but it was decently executed and  I enjoyed my side order of fries; I liked that they came with a small bowl of what tasted like proper whipped-up-in-the-kitchen mayonnaise.

8 responses to “Out and About Last Weekend”