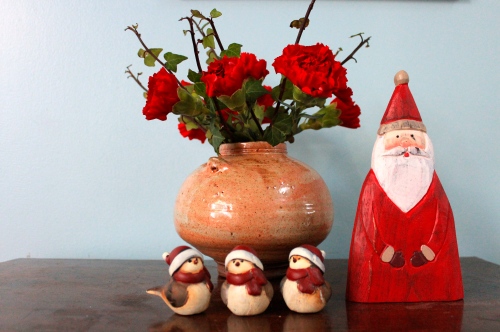 I am not sure of the genesis of my somewhat irrational dislike of carnations but I am reasonably certain that my carnation prejudice couldn’t be innate. The best I could come up with was that at some impressionable age I had read one of those lists which decree what’s cool and what’s not and that the list had declared flower-wise that carnations were totally infra dig. Or maybe I just didn’t like the look of them. Of course the fact that the ubiquitous carnation is a staple in deli-counter and garage bunches of flowers has probably not helped their case. So, for me, a perfectly lovely bunch of flowers which had one or two carnations woven through became a thing of non-beauty once I spotted said carnations.

It has taken a while to unthread my tangled deep-rooted carnation antipathy. I began to look at them in a different light a few Christmas ago when I saw long stems of them intermingled with branches of holly in a rather beautiful pottery vase; the display looked rather good. And a few months ago I saw a picture of some red carnations, in a chic container, mixed with some cooper beech twigs and again the effect was easy and pleasing on the eye.

So this Christmas I dipped my toe in the overcoming-caranation-prejudice water and bought a bunch to use as part of my Christmas decorations. They are in a pottery vase with some bits of ivy. I can’t say I exactly adore them especially as they are a tad too luridly red for my liking and their frilliness appears ragged rather than nicely ruffled. Still they are slowly growing on me and as they are very long-lasting flowers I have, I would think, a whole two weeks to re-examine my carnation attitude.

I checked in ‘Bringing Nature Home’ by Ngoe Minh Ngo and discovered that the common carnation was given its name ‘Dianthus’ by a Greek botanist and philosopher Theophrastus over two thousand years ago. Dianthus according to the book combines ‘the Greek word for divine (“dios”) and flower (“anthos”)’. So who knows if the ancient Greeks found them divine maybe I just need to find some carnation in subdued colours to finally lay to rest my carnation prejudice