♥ Coffee on an Island 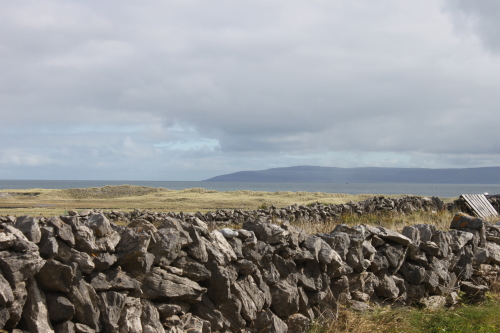 The three Aran Islands are dotted across Galway Bay and beyond them, before the next stop America, is the tumultuous Atlantic Ocean.  I visited the middle island Inis Meáin (population approx 200) yesterday, it’s said to be the least visited and the least commercial of the  Aran Islands. (Inis Meáin is reached from the mainland by plane or foot-passenger only ferry).

My first port of call when I got there was the Inis Meáin Knitting Company’s factory shop (more about the shop in a later post) but unfortunately I arrived at 11.30 and it doesn’t open until 1.30.  So I headed off in search of a cup of coffee, I could see a hotel not far away, it took just five minutes to walk to it but sadly it was very firmly shut. I couldn’t see a soul to ask where I might go.  I began to wonder if I was facing a day on the island, without anything to eat or drink when I remembered that the island has a pub so I started to walk in what I hoped was the right direction. En route I met Elisabeth, she is originally from the Netherlands but has lived on the island for over a year and she was on her way to open up  her garden café called Seál.

So it was that I found myself sitting in an island garden sheltered by lacy limestone walls, looking at the view of the distant mainland, while drinking my coffee and eating a slice of delicious home-made apricot tart.  Elisabeth’s dog Tjitske sat contentedly on the grass watching proceedings.  I think it’s the best coffee I have ever had, perhaps not in the absolute sense of it being the best tasting coffee ever, but rather because as I drank it on this bleakly beautiful small and silent island, I felt totally at peace and at one with the world.  I suspect Inis Meáin has transformative powers; I will go back.

Note: My meeting with Elisabeth was very fortuitous, not only did I get a restorative coffee but I got to chat to the island’s only blogger.  Elisabeth blogs at www.aranisland.info